The Spring homework series is an offseason series that I am doing to start to re-familiarize myself with each conference/team and organize my thoughts. I will spend a couple paragraphs on each team and get an idea of things like returning production, schedule breakdown, and SP+ rankings. I get the majority of this information from Bill Connelly at ESPN+. I’m hoping to get all of the FBS conferences done but will place a priority on the conferences I typically bet the most.

I’m going to start breaking conferences up into divisions because the Mountain West edition got a little wordy.

The MAC started as late as they possibly could to play a Fall season in 2020, as they joined the PAC 12 in not playing their first game until November. With Covid-19 cancellations it was another unsatisfying season for many teams. Buffalo played the most games, 7 (counting the Conference Championship & Bowl Game) while Ohio & Miami (OH) only played 3 games.

Buffalo ran the regular season table, going 5-0 behind RB Jaret Patterson and outscoring opponents 259-105, before losing in the conference championship game to Ball St, but bouncing back with a 17-10 Camellia Bowl win vs Marshall on Christmas Day.

Kent State went 3-1 behind a high-powered offense led by QB Dustin Crum, but had a hard time stopping anyone. Ohio & Miami (OH) both went 2-1 in way too short seasons. Akron improved from their winless 2020 by getting a 31-3 win against Bowling Green. Bowling Green went 0-5 and got outscored 225-57. Yikes.

All-World RB Jaret Patterson is gone, but his brother James is back at LB and QB Kyle Vantrease is back. Vantrease had a solid year last year (96-for-154, 1326 yards, 7 TD and 3 INT). You would figure he would continue to progress but we will see if the running game takes a step back without Patterson which leads to more of an emphasis on the passing game. We didn’t see many instances where the pressure was on the passing game in 2020 and they did lose their best WR Antonio Nunn. Just something to monitor.

The Buffalo program has been improving steadily since HC Lance Leipold came over from DIII Wisconsin-Whitewater. They have a pretty balanced schedule with 7 “likely wins” according to Connelly, 3 toss-ups, and 2 “likely losses” (Coastal Carolina and @ Nebraska).

It’s tough to find many conclusions to draw from Ohio’s 2020 season. They opened up with a heart breaking 30-27 loss @ Central Michigan, then beat the two worst teams in the conference (Akron & Bowling Green) and that was that. Three games played and three games cancelled. What a dumb year.

They have a ton coming back this year, including both QBs. Kurtis Rourke took over the starting job with the graduation of his brother, Nathan, and did a solid job in the small sample size (30-for-44, 386 yards, 3 TD 0 INT). They also bring back the dual threat option Armani Rodgers who rushed for 114 yards on 19 rushes. RB De’Montre Tuggle is back as well (53 Rushes 403 yards 7.6 AVG and 6 TD in 3 games).

Again though, it’s hard to draw too many conclusions about this team because 2 of the 3 games they played were against really bad opponents. The schedule is manageable with only one likely loss and six toss-ups according to Connelly.

This is another tough team to evaluate as they also only played 3 games. We’re not sure who the QB will be in 2021. Brett Gabbert got knocked out of the first game and AJ Mayer came in and played really well to give them a come from behind win against Ball State. But then Mayer struggled against Buffalo and Gabbert took over in their final game against Akron.

Whoever ends up under center should have plenty of weapons around them. They bring in former Northwestern RB Isaiah Bowser who rushed for 866 yards and 4.4 yards/carry in the Big Ten as a Freshman in 2018 before injuries got in the way of his 2019 and 2020 seasons. They’re also bringing back their top 2 rushers from 2019 (Jaylon Bester & Tyre Shelton) both of whom sat out the 2020 season.

The schedule is tough though. Connelly has seven “likely losses” on their schedule. This would mean they would have to run the table in their “likely wins” (Long Island, Bowling Green, Akron) and the toss-ups (@ Kent State, @ Eastern Michigan) and flip one of their likely losses to even be Bowl eligible. 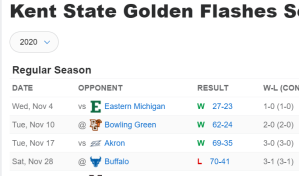 The offense was fun but giving up 24 to Bowling Green and 35 to Akron (not to mention 70 to Buffalo) is pretty gross. Buffalo RB Jaret Patterson rushed for 409 yards and 8 TD against them. That’s insanely bad.

QB Dustin Crum is back for the Golden Flash offense that plays incredibly fast and many of the offensive players are coming back. The question will be if they can get enough stops to give their offense a chance? The schedule isn’t doing them any favors. They have 3 unwinnable non-conference games (Texas A&M, Maryland, and Iowa) and get many of the key conference opponents on the road (Ohio, Western Michigan, Central Michigan)

Akron actually took a small step forward in 2020 from their brutal 0-12 2019 season. They beat Bowling Green convincingly 31-3 and kind of sort of hung around against Ohio and Kent State. If nothing else, they got the monkey off their back and snapped the long losing streak but it still looks on paper like they have a long way to go.

Expect to see a lot of Teon Dollard in 2021. The running back rushed for 666 yards on 112 carries (5.9 yards/rush) and 6 TD in a 6 game season. Their defense needs to keep them in games to give Dollard and the rest of the offense a chance though. They were pretty brutal last year, particularly against the run.

The schedule has five opponents projected 110 or worse according to Connelly’s SP+ so there is an opportunity there to continue to progress.

There isn’t very much to say that’s positive about Bowling Green’s 2020 season. They lose by 28 points to an Akron team that had a 20+ game losing streak at the time…. And that was their second closest game of the season. They didn’t come within 25 points of any opponent all year.

The Falcons are 3-14 overall under HC Scot Loeffler. The 3 wins are against an FCS opponent and a winless Akron team and every loss has come by at least 18 points. Yikes.

It looks like another tough year on paper. The schedule only lists one “likely win” (Murray State) and two “tossups” (Akron and South Alabama). If the season long win total comes in at 3 this will probably be an Under bet for me.