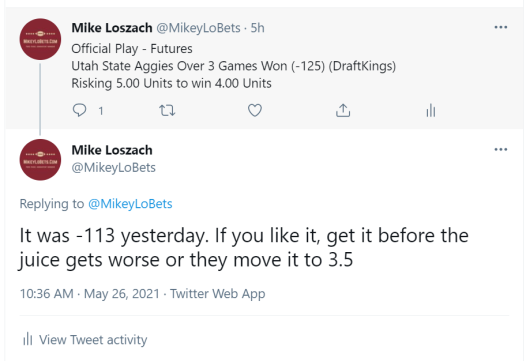 What the Model Says

An important note: as Utah State continues to add more and more talent in the transfer portal I think we will see the model like them even more.

Utah State is a team that had plenty of drama in 2020. Gary Andersen’s second stint in Logan went a lot worse than his first one did and he ended up bailing on his team 3 games in to their 2020 season (which ended up with a 1-5 record). The drama didn’t end there… transfer QB Jason Shelley ended up being dismissed from the team in November which led to 2 games of Andrew Peasley starting (including their only win of the season, Thanksgiving night against New Mexico). To cap things off, the players opted to boycott their final game of the season in response to comments made by the Athletic Director that the players interrupted as not giving the interim coach a fair shot at the Head Coaching job.

Enter former Arkansas State Head Coach Blake Andersen. I really like this hire for Utah State. I always liked Blake Anderson at Arkansas State and I think a fresh start for him will be great in Logan to help him move on from his own personal tragedies. My model has him ranked as the #4 head coach in the Mountain West and the #1 offensive play caller in the conference. I think he will instantly bring some fresh enthusiasm to the Aggie program.

It certainly seems like Anderson isn’t interested in a slow rebuild either. He has brought in a ton of new transfer talent as listed here. The message boards and twitter profiles are also hinting that Anderson may not be done either, so let’s get this bet locked in before the hype increases.

Among the transfers coming in are 3 key players from Anderson’s Arkansas State team, including QB Logan Bonner (156-for-262, 59.5% for 1,863 yards and 18 TD vs 6 INT in 2020) and slot WR Brandon Bowling (39 receptions 507 yards and 7 TD in 2020).  to go along with several other power 5 conference guys. I think the turnaround for Utah State will happen pretty quickly with the new coaching staff and influx of new talent they have coming in. I definitely think we will see flashes from the Aggies already in 2021.

I also love the way that the schedule breaks down for our bet, with the majority of the winnable games coming in the second half of the season after the team has their bye week. Often times we see teams with new coaches struggle a little bit out of the gate, before steadily improving as the season goes on as they get more familiar with the new system. I think that will be the case with Utah State. As long as we get one win before the bye (North Dakota), I think we will be in great shape and see a much improved team after the bye week as they play an easier stretch of the schedule. I think this team will finish the season strong and expect them to win around 5 games this year.