Rather than creating a new post for each bet, I am just going to pin this post for the week and go in and add information and plays as they come in. As always, follow me on twitter @MikeyLoBets to be notified as soon as I make any official plays.

Gross week. It’s never fun, but if you’ve been gambling for awhile you understand that these days happen. The trick is to keep your cool and not do anything dumb in the short-term. We are playing the long game here. We are still up over 14+ units on the season. I’m usually good for one week like this a year. We will bounce back. It’s a marathon, not a sprint.

Lesson learned about fading Alabama & Georgia. I knew they were the top 2 teams in the country but man is the gap really wide between them and the rest of the country right now. We also had a couple tough losses in the FCS. We we’re due for a few losses there with the percentage we had been hitting in the FCS. Tank Bigsby was a bad pick. He must be working through an injury because otherwise I have no idea why they used him so infrequently against that poor LSU rush defense. I’m going to scale back my player prop picks as I’ve been struggling there a little bit.

This line is sitting around -3 right now. If you haven’t gotten it yet, I would probably recommend waiting to see if the line comes back to you at all during the week or trying to get it under -3 live during the game.

South Alabama has been playing solid to open the season. They destroyed South Miss in week one (a game we were on the wrong side of), took care of business against Alcorn State & Bowling Green, and then perhaps most impressively… only lost by 2 points last week to a Louisiana team that could very well end up in the Sun Belt Championship game. They have a solid QB in Utah transfer Jake Bentley and a stud WR in Jalen Tolbert. The defense has been playing better than I expected them to, allowing fewer than 300 yards/game on average and only 283 last week to Louisiana.

Texas State is looking like a really bad team. After we cashed on their win against FIU, it has been pretty bleak for them losing at home to FCS Incarnate Word and then to Eastern Michigan 59-21. Their defense gave up 455 & 499 yards respectively in those 2 games. Incarnate Word was able to shred them through the air for 376 passing yards. I would expect the Bentley-Tolbert connection to be able to have a good deal of success against this secondary.

This is a road game for South Alabama, but in their only other road game they beat a Bowling Green team that appears to be better than this Texas State team. Texas State is nothing special at home, having lost both home games this year to Baylor & FCS Incarnate Word.

Memphis has been a little Jekyl & Hyde this season, but that makes sense with a freshman QB. They do have an impressive win over Mississippi State (even if they benefited from a blown call that resulted in a special teams TD) and their 2 losses to UTSA and Temple have both only been by 3 points. Freshman QB Seth Henigan has been surprisingly good this year posting a 12-1 TD-INT ratio. The offense hasn’t been the problem for Memphis this year. They are averaging 37 points and 476 yards/game. They should be able to get their points against a Tulsa defense that seems to be regressing from where they were in 2020. Most recently they gave up 45 points on 405 yards to a Houston team that seems pretty similar to where Memphis is at.

On the side of the ball, Bearded Bettors favorite Davis Brin has struggled at QB for Tulsa. He has thrown more INT than TD (8 INT vs. 6 TD). Memphis defense isn’t great but with a turnover happy QB I like their chances of being able to get a few stops/turnovers. That could end up being the difference in a game where their offense should be able to get rolling. I see Memphis winning a close game here so I feel comfortable getting the +4.5 points.

These are probably the 2 worst FBS teams in the country so of course we have a play on this game! Both teams are winless and probably up for this game as they see it as their best chance for an FBS win this season.

The UConn defense is giving up 40 points and 460 yards/game. Neither offense is spectacular but I do think both offenses are ahead of the defenses in this game. The UMass offense has shown flashes, scoring 28 points against both Boston College & Eastern Michigan. The UConn offense has actually looked a lot better since they fired their coach scoring 21, 22, and 28 points in the last 3 weeks all against FBS opponents. I think both of these offenses will be good enough to take advantage of the really bad defenses they are going up against and I see both teams being able to score around 30 points. I see this one being a 33-30 type game. 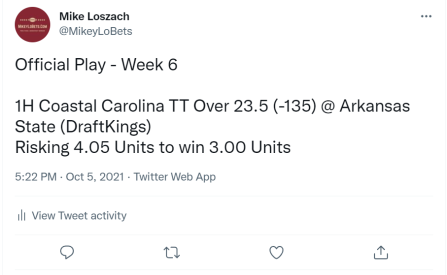 Stud QB Grayson McCall will play this week. What a really like here is that the biggest weakness of the Arkansas State defense is the run defense while the biggest strength of the Coastal offense is the running game. Arkansas State is allowing 263 rushing yards/game on 6.7 yards/carry. Last week they gave up a whopping 503 rushing yards to Georgia Southern on 50 attempts! The Chants should be licking their chops seeing what other teams have been able to do to the Red Wolves. Coastal Carolina has rushed for over 212 yards in every game this season and are averaging 255/game.

If we get 5 first half possessions I really like Coastal’s chances at 3 TD and 1 FG, but it seems likely that we will get more than 5 possessions that really make this look like a good bet to me.