UPDATE: About an hour after making this post the game got postponed. Not meant to be.

While I wait to see if I will get the opportunity to re-bet my voided New Mexico State play, I’ve gone ahead and pulled the trigger on another official play for this weekend: 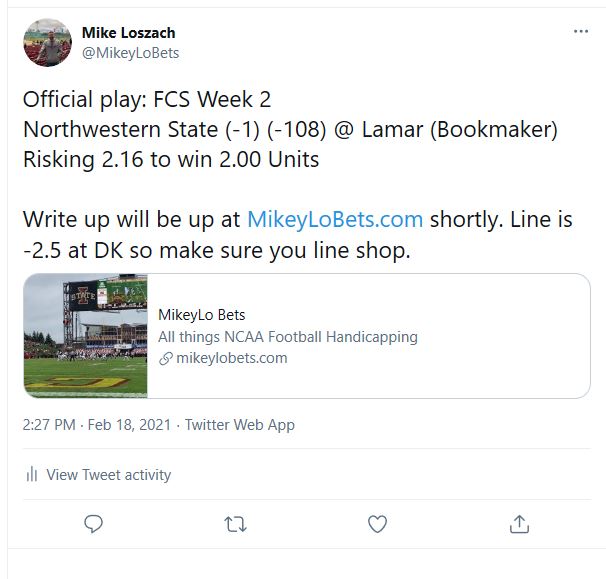 Like I am hoping to do in the Tarleton State-New Mexico State game, I am once again going against a Texas school in this game. The frigid temperatures (by Texas standards) and power outages across the State may have served as a disruption to the practice schedule this week as we have seen several other Texas FCS games cancelled this weekend.

This play is primarily a fade on Lamar as I think the line should be closer to Lamar +4. They are coming into this match-up as a very inexperienced team. They have only 11 seniors on the roster and a whopping 51 freshmen. The delayed season led to them losing their best offense player, RB Myles Wanza, and defensive player, Michael Lawson.

This is a team in a complete rebuild right now. It is unclear who their QB will be this season and I think we might see multiple QB play in this game as they try and get that sorted out. The two that figure to be the first two on the depth chart are both transfers: Austin Scott (Eastern Kentucky) and Jalen Dummett (Feather River).

On the other side, Northwestern State finished the 2019 season pretty strongly (after a brutal start) winning 3 of their last 5 games, which included a convincing 34-13 win over Lamar. They had a pretty solid passing game throughout the year (seen in the stats below) and with a returning head coach and a few returning Junior QBs that have some experience I think they will go into this game a little more prepared than their opponents. 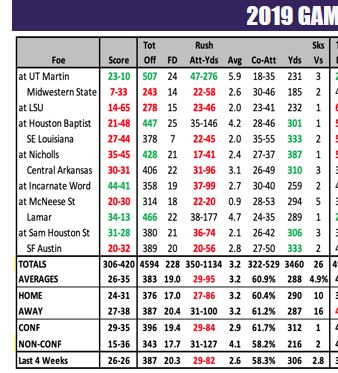 I think the inexperience will be too much to overcome for Lamar. It’s already a weird season with the Covid-19 distractions and playing in the Spring. I think teams that have experience will be able to handle those distractions a little better. In Lamar we have a team with a first year head coach, two new QBS, only 11 seniors and 51 freshmen. On top of that, they had their practice schedule disrupted by the weather this week. I’ll take Northwestern State to cover the -1.