Rather than creating a new post for each bet, I am just going to pin this post for the week and go in and add information and plays as they come in. As always, follow me on twitter @MikeyLoBets to be notified as soon as I make any official plays.

Well we didn’t give anything back after our huge Week 2. The 0-2 Friday was disappointing because both bets looked like they were going to be winners. UCF had the ball in a tie game late in scoring position and threw a pick 6 to turn a win into a loss. Isaiah Williams had 40-some yards in the first half before the Illinois passing attack completely disappeared in the second half. We ended up being down 5+ units going into Saturday when we weren’t very far at all from being +5 Units. It’s gambling, it happens. Considering that start, I’m happy with ending the week +0.12 Units thanks to a very solid 3-1 Saturday. It’s a long season.

This isn’t the first time we went against FIU. We faded them at home 2 weeks ago against Texas State in a game that they lost in OT. That same Texas State team that beat them at home went on to lose to FCS Incarnate Word last week, which begs the question… just how bad is FIU? After a winless 2020, they haven’t really shown much growth in 2021 dropping a home game to Texas State and getting demolished at Texas Tech.

Central Michigan is an upper tier MAC team. They’ve got 2 games against SEC opponents under their belt already, which included a solid showing @ Missouri where they only lost by 10 points. They also crushed FCS Robert Morris 45-0. LSU thumped them pretty good last week, but the level of athletes on the LSU roster are miles ahead of those on the FIU roster. The CMU offense has been pretty impressive putting up 475 total yards @ Missouri and 515 against Robert Morris.

I think the Chippewas will roll in this game in their final non-conference game before their MAC schedule begins. I like them to win this one by 14+. 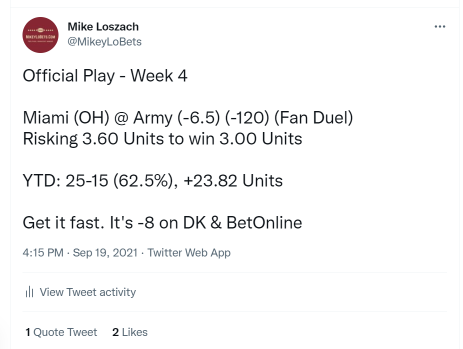 As I noted in my tweet when I made this play official, the line was all the way -8 already on Draft Kings & Bet Online, so I knew the -6.5 wouldn’t last long on Fan Duel. I was right as literally a minute later it flipped to -7.5. It is interesting how in both this game and the Central Michigan game, the books moved the line a full point rather than a half point.

We’ve bet on both of these teams already this season. We bet Cincinnati against Miami (OH) in Week 1 and that bet easily, and then we bet the over in the Army/WKU game in Week 2 and that one also hit easily. So hopefully we have a pretty good feel for both teams right now.

Army has been rolling to open the season averaging 44 points per game and 331 rushing yards per game with their triple option attack. Outside of the WKU game (who has a real impressive offense) the defense has been really solid too against Georgia State and UConn. They were also up pretty big in the WKU game and gave up some late scores to make that game look closer than it was for much of the game.

From a trend perspective I like that this is Army’s 3rd home game in a row and that it will be Miami’s 3rd road game out of 4 games. I think Miami (OH) is a middle of the pack MAC team but not quite on the level of this Army team. The Black Knights are relentless in their triple option attack and I think they will wear down the Red Hawk defense that allowed 247 rushing yards to Cincinnati on 8 yards/carry.

MAC-tion is back! I picked Toledo to win the MAC in the preseason and I’m sticking with that, even after their brutal loss yesterday to Colorado State. This is a buy low spot on Toledo to me. I still think they are a lot closer to the team that should have beaten Notre Dame in South Bend in Week 2 than the team that laid an egg to Colorado State last week, so I’m happy to get this one under -4.

Ball State surprised everyone by winning the MAC last year but I picked them to slide in the conference this year and so far they’re looking capable of that. They opened the season against a bad FCS Western Illinois team and got an unimpressive victory in which they were actually outgained in total yards. After that, they’ve been crushed by Penn State & Wyoming, giving up 89 total points in the 2 games.

I think Toledo will start fast in this one trying to get the biter taste out of their mouth from last week and eventually cruise to a 7+ victory.